The Urban Design Studio worked with Councilman Brandon Coan of District 8 in Louisville to repurpose part of our city's history.

When the Old Cardinal Stadium at the Fairgrounds was being torn down, Councilman Coan wanted to find a way to reuse the seats that were just being thrown away. We reached out to a group to People for Urban Progress (PUP) a non-profit organization out of Indianapolis who had developed a similar project called PUPStops, to learn best practices, determine the feasibility, and figure out the process to realize the project. After that conversation we got to work.

The underlying idea behind the project was to demonstrate the creative reuse of part of our City’s history–reclaiming stadium seats from the Old Cardinal Stadium that were destined for the landfill–to improve public spaces, increase seating capacities and elevate the image of public transportation.
On March 20, 2019 we rented a U-Haul truck and gathered a group of civic-minded friends together outside the Old Cardinal Stadium. We salvaged 120 seats, 10 yellow seat sets of two, 1 red seat set of four, and 32 red seat sets of three. Somehow amazingly we were just able to fit all the seats in one truck load.

Through the generosity of Gill Holland, we were able to store the seats in one of his warehouse properties adjacent to the Urban Design Studio in the Portland neighborhood until they were ready to be cleaned up and rebuilt. We worked with local artist shop RockerBuilt to sandblast and powder-coat the metal frames, rebuilding the seats and providing new mounting steel for the first phase of the project. 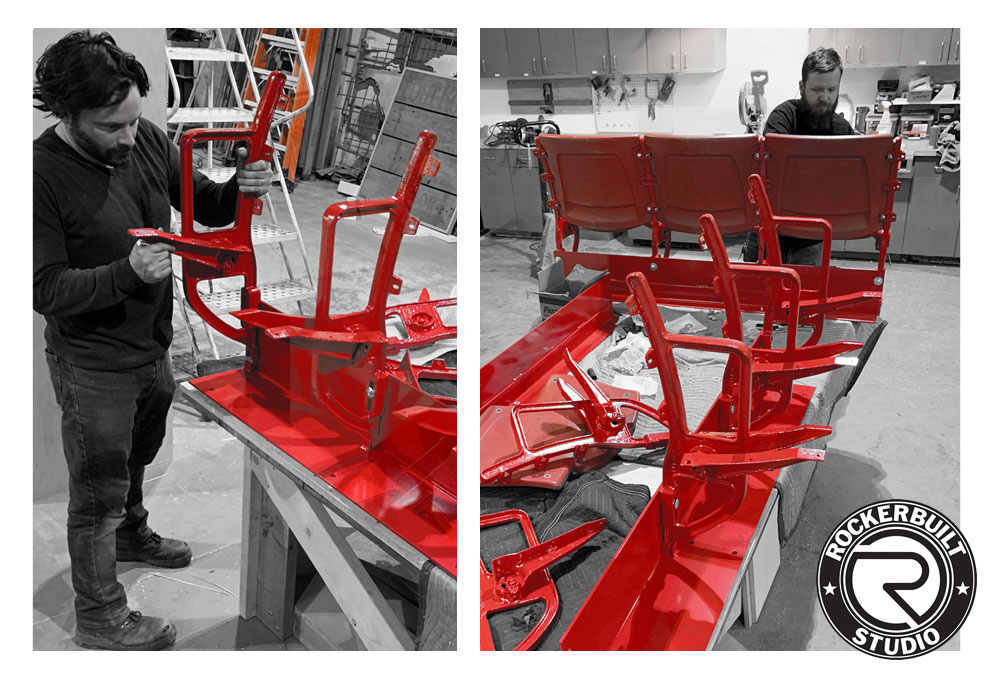 While the logistics and fabrication of the seats was being worked out, we collaborated with Metro Public Works and the Transit Authority of River City (TARC) to locate appropriate stadium seat sites for the first phase along the Bardstown Road commercial corridor. Some of the criteria for the sites were that (aside from the initial prototype site) the stadium seats would be located in places that added seating capacity rather than replace existing seats, and that there was a concrete pad already available to secure the seats to as new slabs of concrete would increase the cost significantly.

On September 26, 2019 we unveiled the prototype installation of the Stadium Seat Bus Stop Project (see the main image at the top of this page), a red three seat unit. This was to be the first of 17 bus stop locations in District 8 primarily along a 2-mile stretch of Bardstown Road with two stops on nearby Barrett Avenue for the first phase of this placemaking project. Our partners at TARC and Public Works requested we do a pilot installation to last several weeks to make sure there weren’t any unexpected issues with the re-fabricated seating before moving on to the rest of phase one. The remaining 25 seating-units for phase two were to be offered to other Metro Council members to sponsor and locate in their districts across Louisville. 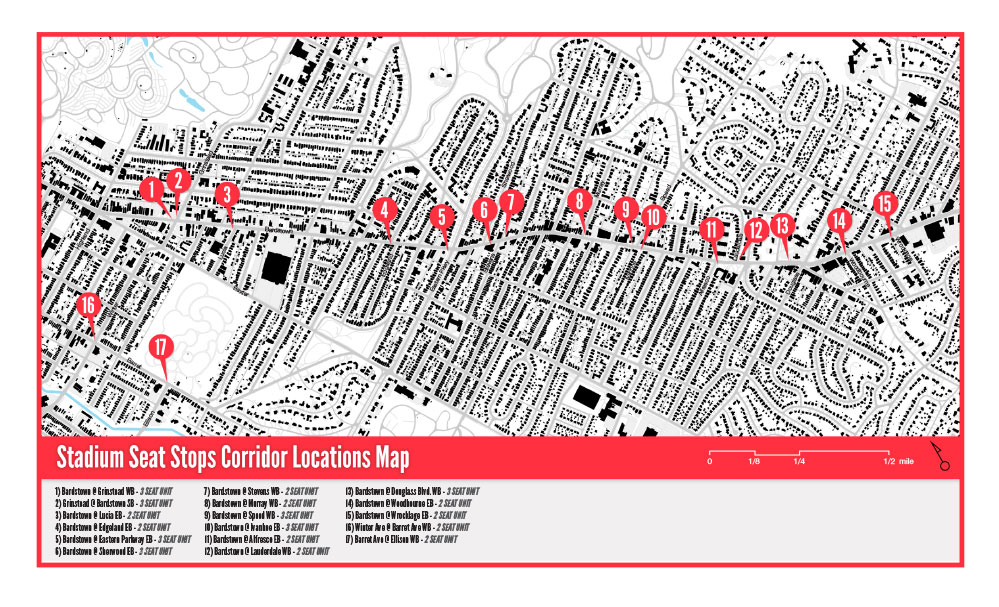 Several days after the prototype seating was installed someone had spray painted blue graffiti on them. This definitely was deflating, but the outpouring of support for the project and the ability of them to be relatively easily cleaned provided us a lesson about how to maintain the seats and validation that people along the corridor cared about the project.

Once the prototype had been evaluated for a few weeks Rockerbuilt fabricated the rest of the phase one seats. The day we unveiled the prototype Councilman Coan offered sponsorship opportunities to the public for the 16 other predetermined locations just to cover the costs with three-seat segments going for $850 and two-seat segments for $637.50. The seats were designed with a sponsorship message plate on the sides of the units where the sponsors could have a message attached in their honor and choosing.

The initial plan was to work with UofL Master of Urban Planning students to collect data and study how the seats are working and inform what other possible improvements and interventions can be made to the streetscape, however the pandemic and shutdown hampered evaluations, but hopefully when the virus is under control we will be able to collect the data.

The following are images of phase one before and after installation. Once the other 25 benches are installed around Louisville Metro we will photograph them and add a broader system map. 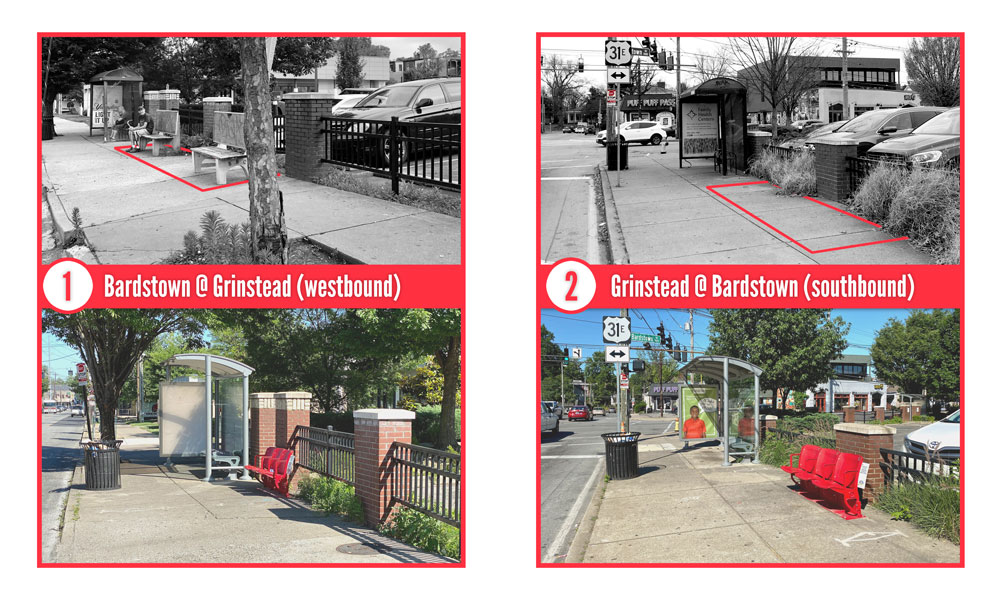 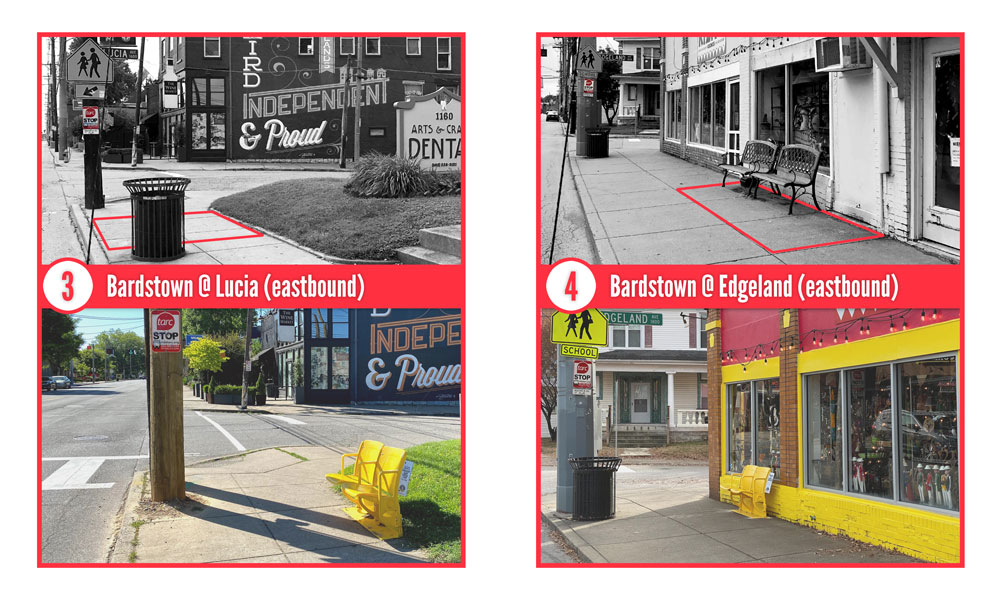 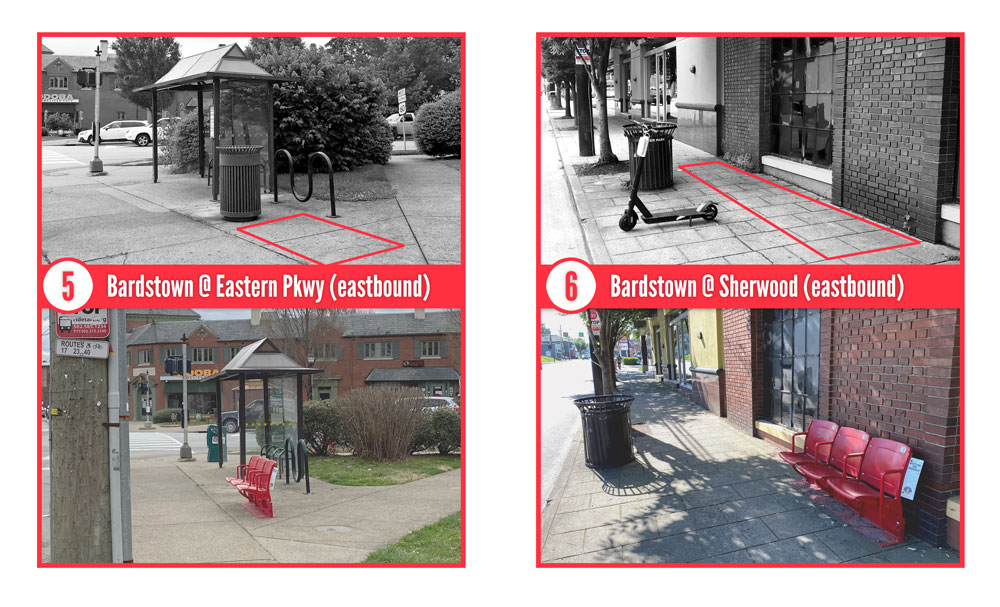 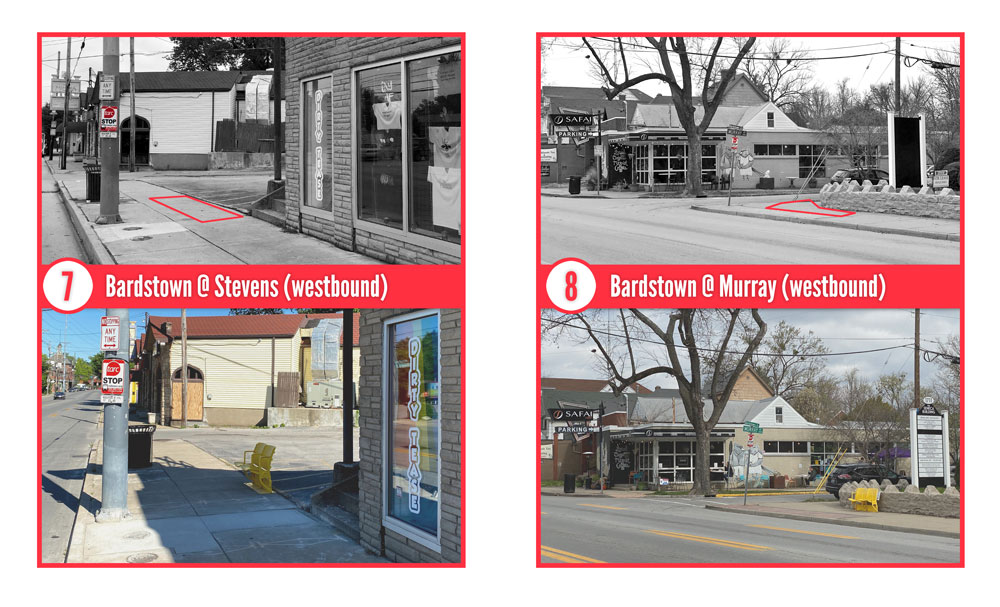 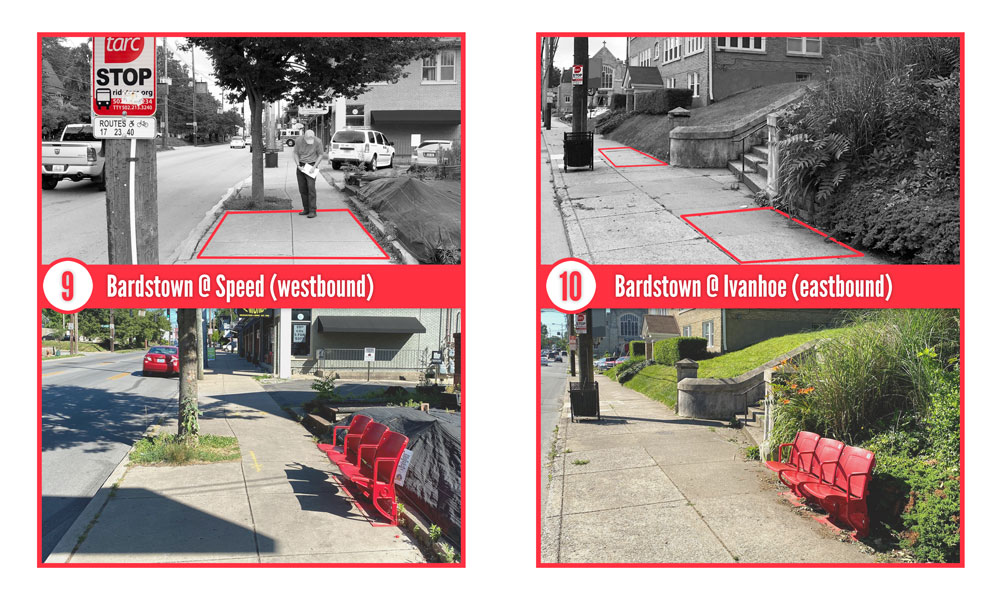 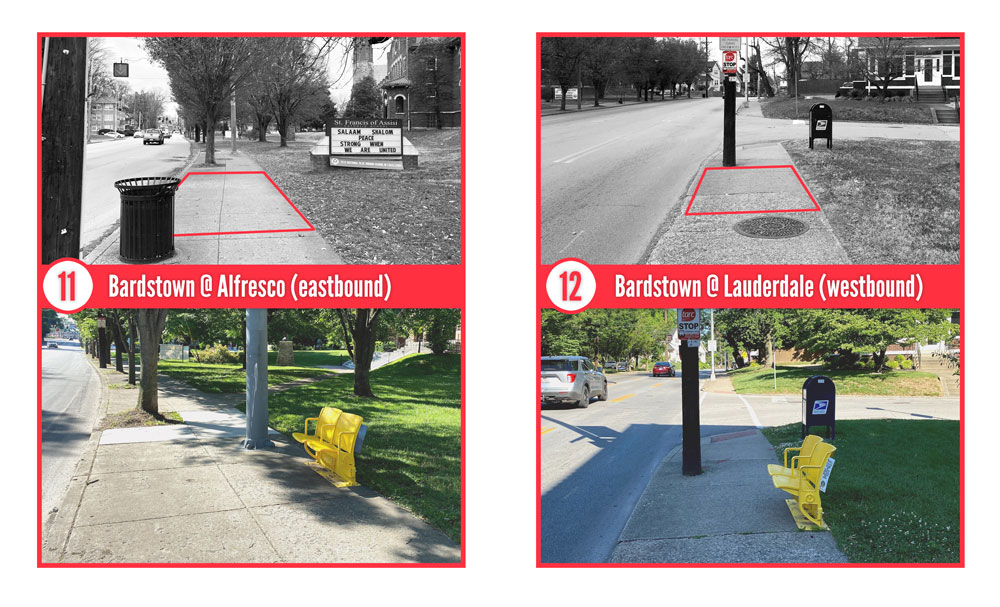 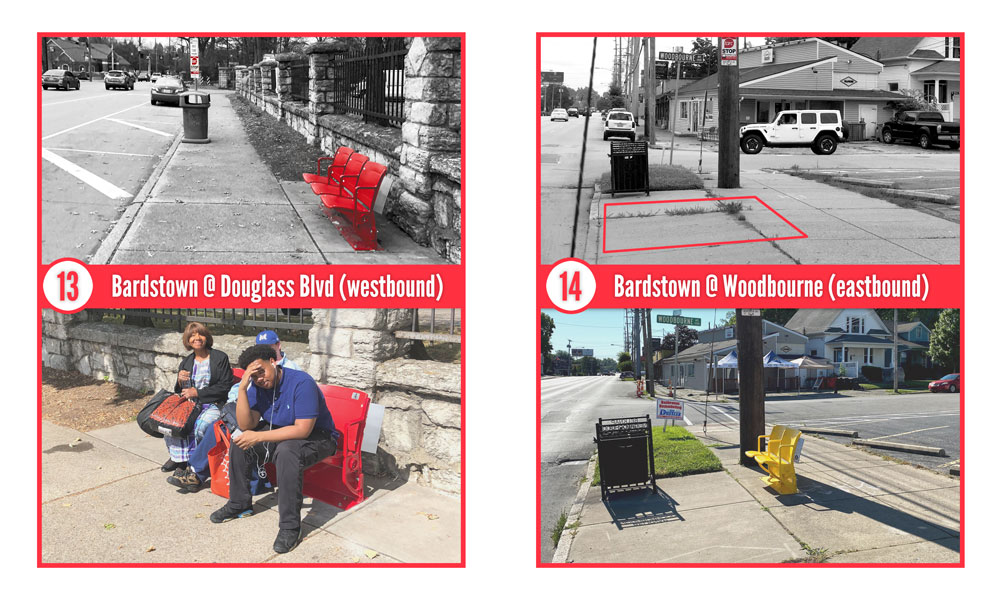 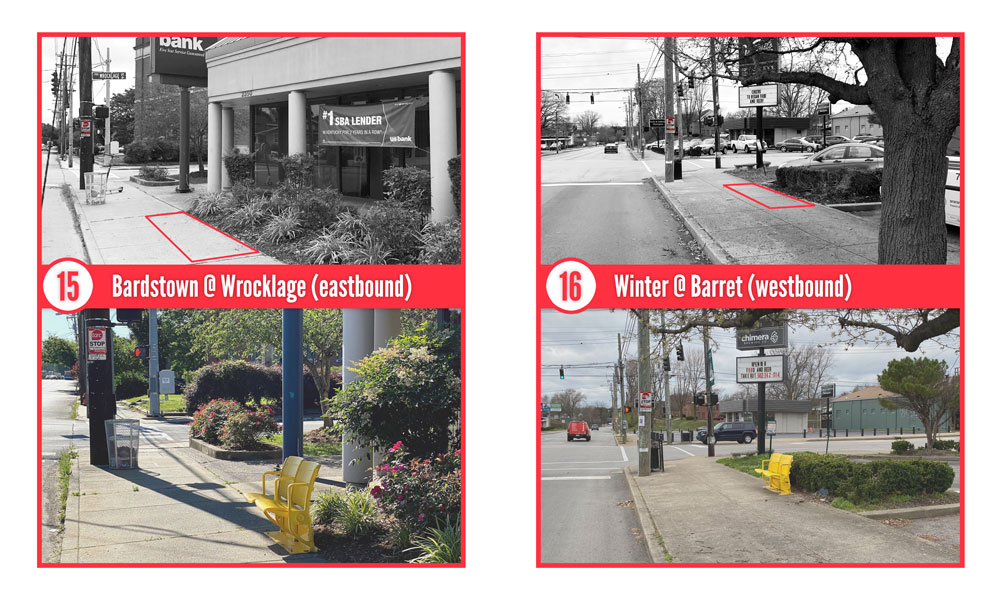 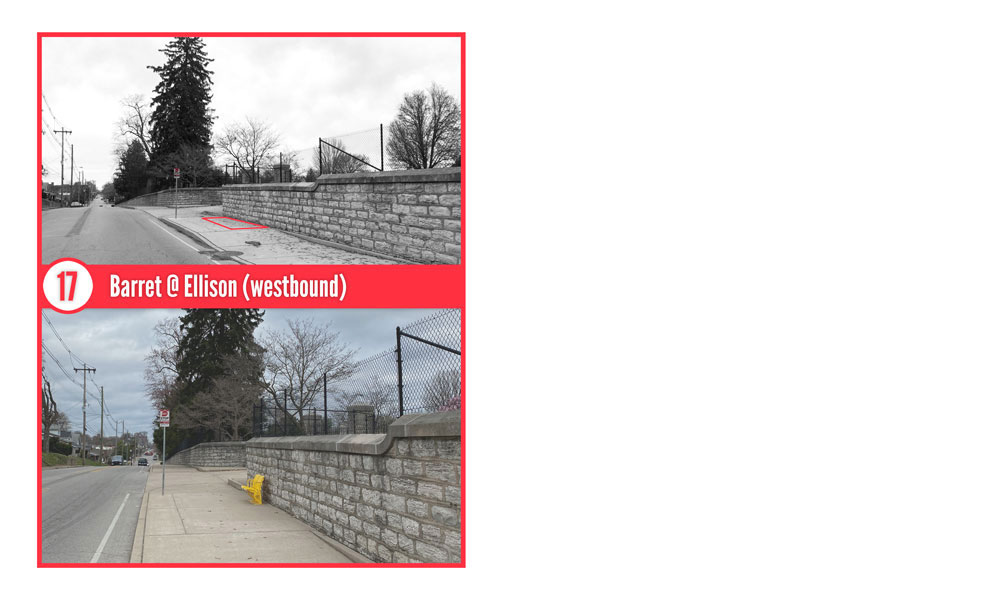