‍In 2010, Louisville Councilmen Jim King (District 10) and Brent Ackerson (District 26), with the assistance of Councilman Tom Owen (District 8), commissioned Center For Neighborhoods (CFN) and the University of Louisville’s City Solutions Center (CSC) to develop a conceptual streetscape plan for the Bardstown Road Corridor, an effort to be patterned after a successful earlier effort focused on the Preston Highway corridor of Louisville.
‍
Subsequently, the CFN and CSC engaged the assistance of the landscape architecture department of the University of Kentucky to develop a set of preliminary design studies for the corridor via a fourth-year undergraduate studio conducted during the Spring Semester 2011. To provide for broad-based involvement of area residents and other key stakeholders, the CFN, CSC, and UK convened a community design workshop in January 2011 at the community meeting room of Brooklawn Child and Family Services on Goldsmith Lane. Based upon the community’s input, twelve students from the UK landscape architecture studio developed six conceptual corridor plans, which were presented to the community at an open critique, again at Brooklawn, in May. CSC’s Director of Planning, Michael McCoy, employed the UK plans and the corresponding record of community feedback to develop the plans contained within this volume.
‍
The premise behind this effort is that improvements to the streetscape – increasing the accessibility, walkability, and natural attractiveness of the corridor to the surrounding neighborhoods – will lead to a stronger interrelationship between corridor businesses and their most immediate market and, therefore, to a more viable and cohesive district. This plan reveals, to the best of the designers’ability, the aspirations of the surrounding neighborhoods for the automotive, bicycle, and pedestrian way that commonly serves its transportation needs, as well as a standard of public landscape well above what currently exists within the Bardstown Road right-of-way between Gardiner and Hikes lanes. To accomplish anything resembling the scope of this design will require the substantial involvement and cooperation of local government, of neighborhoods and – equally important – of property owners and developers seeking to renew the vitality of this important suburban corridor and district.

Given the extensive length of Bardstown Road and the various characteristics and neighborhoods the roadway touches, during the process of the study a group of stakeholders decided to give the project a more distinctive name, that of the Bashford Manor Corridor. From this point on the study area will be referred to as the Bashford Manor Corridor while Bardstown Road will be used to refer to the actual physical roadway when required for clarification. 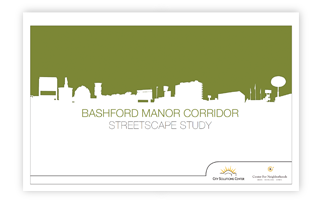